Hammamet has a lot to offer

It is the perfect combination of mile long beautiful beaches and turquoise sea that makes Hammamet at the southern tip of Cap Bon the most popular seaside resort in North Africa. In addition, the scent of jasmine gardens, lemon and orange groves fills the air.

Hammamet was founded in ancient times under the Roman name "Pupput". Its current success story began in the 1960s, when Winston Churchill, Oscar Wilde and Sophia Loren fell in love with the Tunisian coastal town. The medina of Hammamet lies on a peninsula surrounded by sea and is enclosed by a mighty 12th century city wall.

You can enjoy the best view over the old town from the walls of the mighty Kasbah, which marks the transition to the harbour quarter.
Yasmine Hammamet, five kilometres from the city centre and a popular tourist destination, will show you Hammamet's modern side: you can stroll through an elegant marina, visit a casino or end your day in a discotheque or beach bar.

The TUI MAGIC LIFE Africana is located directly on a long, fine sandy beach and offers a wide range of all-inclusive activities for water sports enthusiasts. You can experience fun and action while water skiing, monoskiing or wakeboarding. The Banana Boat also regularly races over the waves.

Canoes, windsurfing equipment and catamarans can be hired from the resort's own water sports centre on presentation of your international surfing/sailing licence. At the VDWS School you have the opportunity to obtain a surf, sailing or catamaran licence during your holiday in Tunisia for a fee.

Enjoy your holiday as a couple

In the All Inclusive resort Africana, everyday life moves far away and you as a couple experience a valuable time together. Together with your partner, you can take advantage of the extensive range of sports and fitness activities, spend your time practising yoga or chill-out at the relaxation pool.
Even more wellness moments await you in the sauna or for an extra charge in the hamam or with a soothing massage. Romantics especially look forward to atmospheric dinners at one of the tables for two and lonely walks along the beach hand in hand.

Sunny holidays for the whole family

Families can expect a carefree holiday in Hammamet. In our all-inclusive resort children have many opportunities for swimming and splashing around: a long, shallow beach, a large pool landscape with two family pools and three water slides as well as two children's and baby pools. Thanks to pirate treasure hunts, circus days and the like, your children will never be bored.

Teenagers are thrilled by the varied and age-appropriate entertainment programme with activities such as DJ workshops or bikini parties. The whole family spends time together e.g. at archery or kite flying.

Things to do in Tunisia

In traditional Tunisian cuisine, oriental spices and the hot Harissa paste are a must. Garlic, pepper and tomatoes are also part of many dishes. Chickpeas or couscous are often served as a side dish with meat and vegetable sauces, seafood and fish. Brik is a popular snack: these are deep-fried dumplings filled with minced meat or tuna with egg.
As a refreshing drink - especially on hot days - strong, intensively sweetened peppermint tea is offered. In the All Inclusive resort Africana you will get an authentic impression of Tunisian cuisine in the local speciality restaurant Sofra. 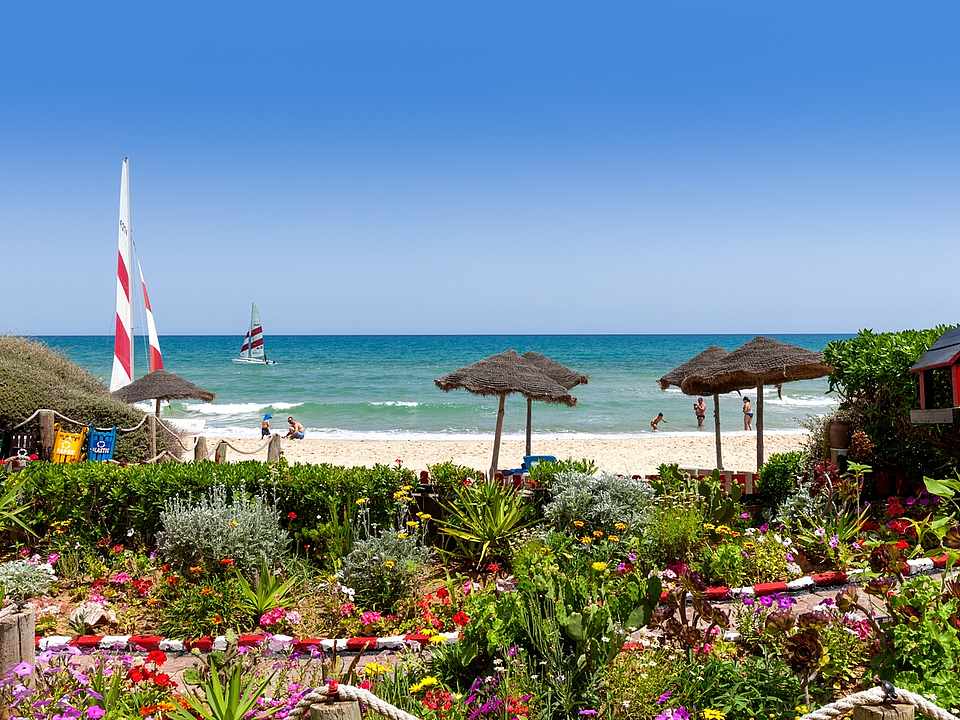 The bathing season in Hammamet begins in mid-May and continues into October. During the summer months of July and August, temperatures of over 30 degrees Celsius are regularly measured and the Mediterranean Sea warms up to a pleasant 25 degrees Celsius. The weather is very stable during this period with up to ten hours of sunshine per day.

For active holidaymakers and those interested in culture, the winter months are the best time to travel: Even then the climate in Hammamet is quite mild with temperatures around 20 degrees.